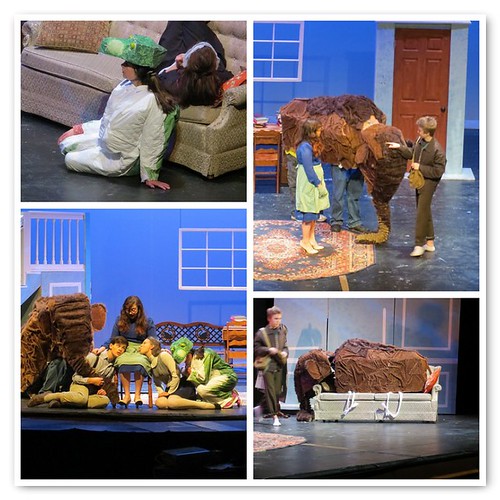 It was a great show. It went well. The kids worked incredibly hard, and to a remarkably high standard.

I had hoped to be able to show you that I am painting, or at least, experimenting with paint, but they are harder to photograph than I expected, so instead I give you a travelogue.

This is the view out my mother's back door, over Plum Island Sound and north over the Parker River marshes. It is inspiring. 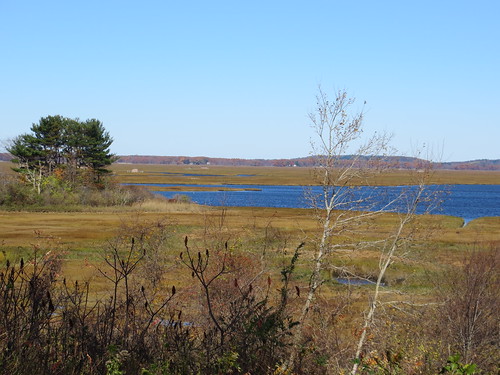 Monday was one of those shriekingly lovely days that comes after the wind has blown all the cobwebs out of the corners and all the remaining leaves off the trees. For us, the winds peels out of the north-west, and howls around the corners of houses and whistles through branches and makes whitecaps on the marsh and on medium sized puddles. The wind was still blowing, but it didn't feel as though anything not firmly anchored was headed for Spain.

Great Kate and I took artwork to the Crane Estate in Ipswich for their show and sale. We picked up my mother, who told us things about the house (it is more of a mansion, and just shy of a castle) and the people who used to live in it. We all marveled at what it might have been like to live like that, with an army of staff to look after the hosue and grounds and people. 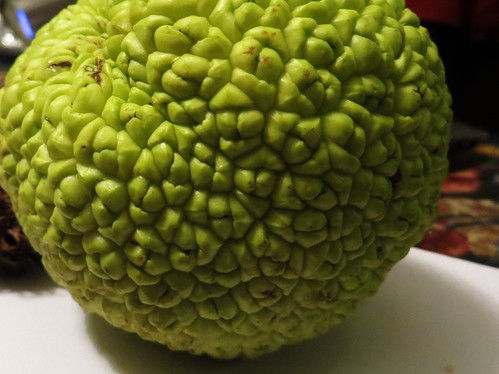 On the long and winding road up the hill to the big house, there was a view, and a weird tree with extravagantly lumpy greeny-yellow things on the ground. Since my mother and I both have no dignity, we stopped the car and grabbed a couple, to ID later. Great Kate reached a computer before we did, and told us it is Osage orange, which is not actually an orange at all.

To my delight, it was probably eaten by mammoths, mastodons and giant ground sloths, before those megafauna became extinct. It smells lovely, and makes me laugh every time I look at it. 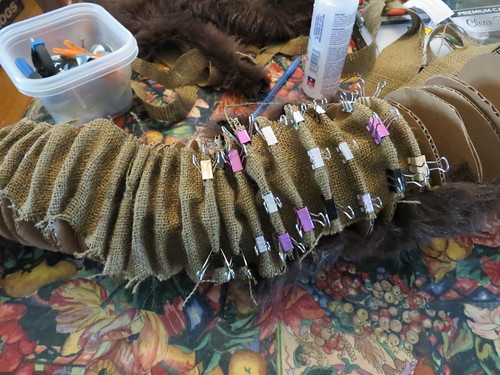 And thus we segue from mammoth food to mammoth costumes. This is the underneath of the mammoth trunk, and the top is furry and perfect, and it is now time for me to continue working towards the tail and finish the skull, ears and leggings for the occupants of the costume.